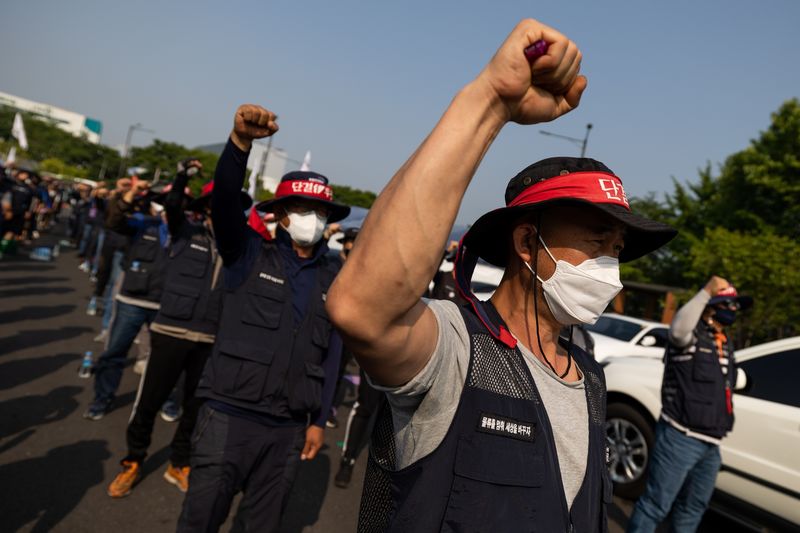 The eight-day strike by South Korean truck drivers has finally ended! The truck drivers union and the government announced an agreement on the evening of the 14th. After the Ministry of Land, Infrastructure and Transport promised to extend the basic wage guarantee program, truck drivers agreed to return to work immediately, and the global supply chain crisis caused by the logistics shutdown in the Asian export town was lifted.

South Korea’s Ministry of Trade, Industry and Energy revealed that in the first six days of the truck drivers’ strike, industries such as steel, automobiles and petrochemicals lost about 1.6 trillion won ($1.2 billion). The ministry estimated that 450,000 tonnes of steel had not been delivered on time; about 5,400 cars had been out of schedule due to a lack of parts; and cement shipments were 90 percent below normal levels.

Faced with soaring fuel prices, thousands of South Korean freight drivers joined a strike to pressure the government to extend the basic wage guarantee system, which is scheduled to end at the end of this year. This action led to delays in the shipment and delivery of South Korean steel, cement, petrochemical products, tires, etc., and some factories were even forced to suspend production.

According to the agreement between the two parties, the Ministry of Land, Infrastructure and Transport promised to extend the basic wage guarantee program, which was abolished at the end of the year, and will continue to discuss expanding the scope of protection. At present, in addition to the basic salary guarantee for container truck and cement truck drivers, other types of professional truck drivers are also considered for inclusion. In addition, the South Korean government plans to study the expansion of the fuel subsidy system.

Diesel prices have risen by 50% in the past year, and the “Safe Rates System” (Safe Rates System) plan, which will take effect in 2020 and aims to protect the wages of truck drivers, will step down at the end of the year after three years of implementation. It was the trigger for the South Korean truck driving strike protests.

Experts pointed out that the delay in the end of the strike may have hurt the global supply chain, which has been deeply affected by the Russian-Ukrainian war and China’s epidemic prevention and control. However, an official from the Ministry of Industry, Commerce and Energy pointed out that South Korea’s major exports such as semiconductors and automobiles have not been reported to be significantly affected. Business organizations such as the Korea Chamber of Commerce and Industry (KCCI) and the Korea International Trade Association (KITA) expressed their affirmation on Wednesday that freight drivers had ended their strike and returned to work, but they were also worried about the government’s promise to extend the “stable freight rate” plan. Freight operators are forced to raise wages and create a burden.